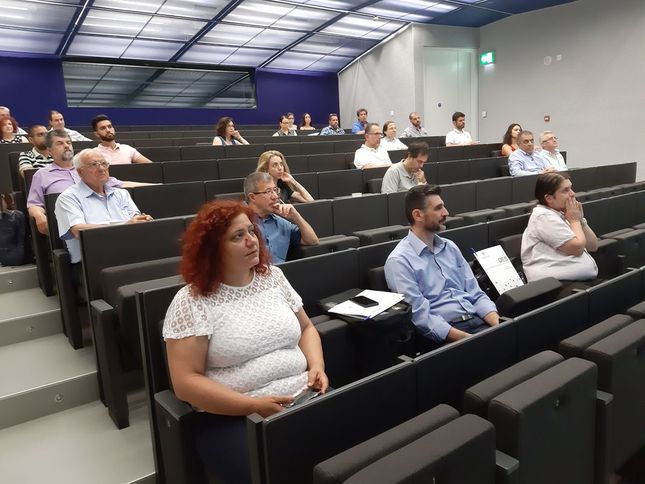 It was held on 3rd June

It was held last 3 June at University of Cyprus premises the 4th BEL for Maestrale partner University of Cyprus.
In the workshop were presented the updated MAESTRALE results, the geodatabase data developed (http: // maestrale - webgis. unisi. it / ) and both proposed pilot projects for blue energy. The first project relates to the utilization of marine biomass through micro- algae and the second relates to the conversion of wave energy by using an innovative Cypriot technology developed by SWEL (Www. Swel. Eu).

A presentation of the national renewable energy strategy for the period 2020-2030 from Mr. George Partasides from the Energy Agency, who explained the existing situation and the objectives of the Cyprus national plan strategy for 2030. He also reported ways of promoting Blue Energy as well as policies and measures that are being implemented in Cyprus to achieve the 2030 targets . Then, Mr. George Kotsiovelos, Manager of SYCHEM CYPRUS, presented combined systems of energy geoexchange and desalination in hotel buildings using seawater. In his presentation , he referred to how the systems work and examples of how those systems are used  from  AMATHUS Hotel and 'OVAL' building which are located in Limassol.
Then the Mr. Michael Fountoulis from the Department of Electrical and Mechanical Services descripted the Underwater cables Regulations and licensing procedures. Blue Energy project connection conditions to the distribution network were presented by Mr. Petros Minas , Assistant Director of Studies and Connections of the Distribution System Operator . The speaker explained the complete process that a project has to do in order to be connected to the distribution network.

Then Dr. Dimokratis Grigoriadis and Mr. Charalambos Frantzis from the Department of Mechanical Engineering and Construction of University of Cyprus, presented an innovative WEC of the Cypriot company SWEL to convert wave energy and the verification measurements made on the generated power from the WEC. Finally , Mr. Fotis Efthimiou CEO  of PHOTOR IA LTD, presented his innovative WEC. The speaker said that this technology will be piloted in Thessaloniki in about a month while he intents to install another device off the coast of Cyprus .

Great public participation with questions, comments and suggestions at the end of each speech. Discussions were centered mainly in the legislative framework that governs the (often discourage) the application of new Blue Energy technologies in Cyprus. 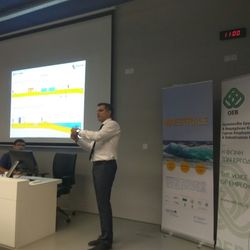 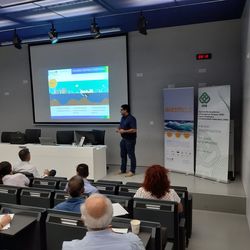 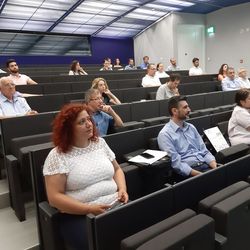