Experts have highlighted the great potential of the Mediterranean

On 25th February  more than thirty entities, companies and people interested in renewable energies, have met in Valencia Port to discuss about the potential of the Mediterranean to take advantage of marine resources and obtain clean energy in the first Blue Energy Lab (BEL) of the Valencia Region.
Throughout the morning several presentations and round tables have been developed in which experts have analysed the possibilities of the Valencian coast for the implementation of infrastructures that allow to take advantage of the potential of the Mediterranean to generate renewable energy.
This event, organized by CEEI Valencia together with the Valencia Port Foundation, is part of the MAESTRALE Project of the Interreg MED programme, co-financed by the European Regional Development Fund.
Following the reception of the attendees, the day began with the presentation of the MAESTRALE project, which is now in its final phase. The Maritime-Marine Cluster of Andalusia (CMMA), also a member of the MAESTRALE project, presented the results of its first two BELs carried out a few months ago and the pilot projects being developed in Andalusia.
In the first round table representatives of the Port Authority of Valencia and Castellón, of the Horizon 2020 HISEA and ODYSSEA projects and the company I-Box Create, have spoken of the increasing trends of sustainability in the ports and the energy potential of the marine energy in these areas.
During the second part, a round table was held in which new trends in renewable marine energy generation were highlighted by APPA Marina, and three companies that are working on its development, TYPSA, EnerOcean and Rotary Wave.
Of all the possibilities, the use of tidal or offshore wind energy has been highlighted throughout the event as two of the best options for this area and the importance of the seas and oceans as engines of the European economy has been highlighted for their great potential for innovation and growth. 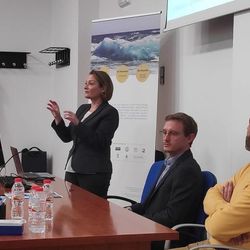